Sanskrit is one of the oldest language know to human kind, known to exist from 600 BC(earlier Vedic Sanskrit). Lets see below Interesting Facts about Sanskrit Language.

The word “Sanskrit” is a combination of two words – “Sanskar” and “Krit”.

“Krit” meaning “Inculcating” and “Sanskar” meaning “Essence of Moral Values”. Thus Sanskrit means a language which has capacity to indoctrinate higher values in an individual, the self. 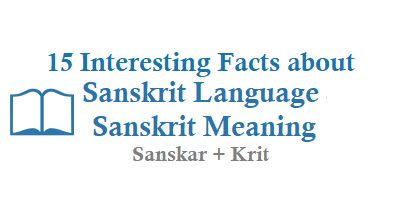 1.Sanskrit has been proven to aid speech therapy. After all, it is the only language which accelerate all the nerves of your tongue, and also in increases concentration.

2. Sanskrit is perhaps the most accurate language phonetically and otherwise. It makes use of 49 types of sounds that make pronunciations of different kinds of words very distinct.

3. Ancient Nalanda library had many Sanskrit texts in their storage until it was ravaged and burnt by Bakhtiyar Khilji.

4. There are 3 Indian Villages rely solely on Sanskrit to communicate with each other they are Mathur (Karnataka), Jhiri (Madhya pradesh) and Khada (Rajasthan) are names of such sanskrit speaking places.

5. According to Forbes that Sanskrit is the most computer Friendly Language(said in July 1987).

6. In the English language itself we can trace several words back to Sanskrit. Mosquito from maShaka, sugar from Sarkara, camphor from karpUra, cash from kArsha, cassiterite (the technical name for tin) from kAnsya and many more.

Sanskrit has the longest word among all the languages —

Sanskrit allows word compounding of arbitrary length. Nouns and verbs can be expressed in one word. The longest word ever used in Sanskrit literature is (in Devanagari):

“In it, the distress, caused by thirst, to travellers, was alleviated by clusters of rays of the bright eyes of the girls; the rays that were shaming the currents of light, sweet and cold water charged with the strong fragrance of cardamom, clove, saffron, camphor and musk and flowing out of the pitchers (held in) the lotus-like hands of maidens (seated in) the beautiful water-sheds, made of the thick roots of vetiver mixed with marjoram, (and built near) the foot, covered with heaps of couch-like soft sand, of the clusters of newly sprouting mango trees, which constantly darkened the intermediate space of the quarters, and which looked all the more charming on account of the trickling drops of the floral juice, which thus caused the delusion of a row of thick rainy clouds, densely filled with abundant nectar.”

It is composed of 431 letters thus making it the longest word ever to appear in worldwide literature.

8. In Sanskrit, a word generally has a lot of synonyms. For example, elephant has 100 synonyms.

9. Languages such as Thai and Lao contain many loanwords from Sanskrit, as do Khmer, and even Vietnamese to a lesser extent, through Sinified hybrid Sanskrit.

10. As of now 24,828 people in India have registered Sanskrit as their mother tongue.

11.Before the Arab invasion Sanskrit Served as the National Language of Indian Subcontinent.

12. The Vedas (written in the Sanskrit language) are among the world’s oldest written texts. RigVeda, SamVeda, Atharva Veda and Yajur Veda.

13. Sanskrit is the scholarly language of not one but three major religions of the world: Hinduism, Jainism and Buddhism.

14. There is a newspaper published still now in Sanskrit. It is Sudharma available online even now.

15. 102 arab 78 crore 50 lakh words have been used in Sanskrit till now. If it will be used in computers/technology, then more these number of words will be used in next 100 years.

Facts About Sanskrit Language in Video