Below are some unique and Interesting Facts of Telugu Language,spread this to more Telugu people and know them the greatness of our Telugu, Na Telugu – Des Bhashalandu Telugu Lessa. 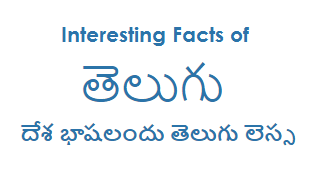 1. Telugu Language known to exist since the Time period 400 BCE.

2. In 2012 Telugu has been voted as the 2nd best script in the world by International Alphabet Association, Korean ranks no 1.

3. Speaking Telugu Language activates about 72000 neurons in your body, highest for any Language in the world proven by Science.

5. There are many many Telugu communities in Myanmar Just do a Google Search.

6. In 16th century an Italian Explorer Niccolò de’ Conti found that the words in Telugu language end with vowels, just like those in Italian, and hence referred it as “The Italian of the East”.

7. Telugu ranks 3rd by the number of native speakers in India (75 million people), and 15th in the Ethnologue list of most-spoken languages worldwide.

8. Telugu derived from trilinga, as in Trilinga Desa, “the country of the three lingas”. According to a Hindu legend, Shiva descended as a linga on three mountains: Kaleswaram in Naizam, Srisailam in Rayalaseema and Bhimeswaram in Kostha;

9. Telugu is the only language in the Eastern world, that has every single word ending with a vowel sound.

10. Telugu language has the most number of Saamethalu i.e., idioms and proverbs.

12. Rabindranath Tagore is said to have stated that Telugu is the sweetest of all Indian Languages.

13. About 200 Years ago about 400 people Telugu speaking people were taken to Mauritius for slavery now Prime Minister is one of their descendant.

14. A Palindrome of 40 slokas which when read from start to end is Ramayana and end to start Mahabharata, there is no other Language like this. 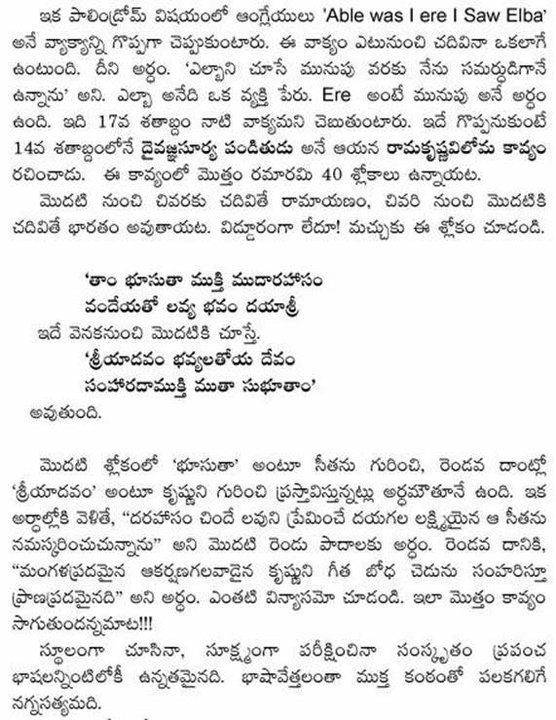 15. Sri Krishnadevaraya visited his temple in Srikakulam and paid homage to the deity. It was here that Krishnadevaraya wrote the literary classic, Amuktamalyada at the order of the Lord Andhra Vishnu who had said “Des Bhashalandu Telugu Lessa” (Telugu is the greatest among the state’s languages”) and ordered Sri Krishnadevaraya to adopt Telugu as the official language of his province.

Lord Sri Vishnu told him to compose the story of his wedding with Andal at Srirangam (“rangamandayina penDili seppumu..”). From 14th poem of this work we can see that the, Lord also ordered the emperor to tell the story in Telugu and referred himself as King of Telugus (Telugu Vallabhunḍa) and refers Sri Krishnadevaraya as Kannada King (Kannaḍa Rāya). (…nEnu delugu raayanDa, kannaDa raaya!, yakkodunangappu….). The Lord reasoned “telugadElayanna, dESambu Telugu. yEnu Telugu vallaBhunDa. telugo kanDa.…. yerugavE bAsADi, dESa BhAShalandu Telugu lessa!” The emperor obliged and composed Amuktamalyada which is one of the most famous poetic works in the entire Telugu literature.

16. We have a single lettered poem in Telugu also called ekashara padhyamul, see below

Please lets share this useful info to all Telugu people and let them know the greatness of the Telugu Language.