Below is the 3 part of Men will be Men cool examples, you can read Part 1 and Part 2 as well.

Table of Contents show
1. Boys will be Boys
2. Men will be men

Boys will be Boys 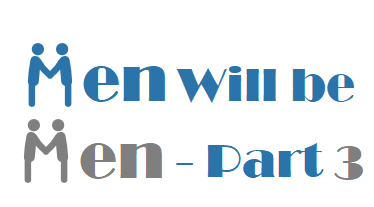 Men will be men

A girl at bus stop spotted a handsome man and without hesitation she said “I love you”.

Man placed his hand on her head, “This love and infatuation all are nothing, Go back to your home and study hard so that you can lead a successful life.”  Man then placed a piece of paper in her hand, “I have written some wisdom for you, read before you sleep tonight” and went away.

Girl went back to hostel with tears and before sleep, she opens the paper.

“Are you blind? My wife was standing right behind me, anyways this is my number, call me anytime, by the way I love you too”.

Men will be men.

One day, while sitting in a restaurant and having coffee,
one friend asked the other: “how is your relationship with that new girlfriend going?”

A : I forgot to mention, yesterday she came to my house.

B : WOW!!! What happened then? Tell me the full story.

A : Well, I played her favorite music and we danced.

B : Then what happened??

A : As we were dancing together, we kissed…

A : I picked her up in my arms and sat her on the table next to my new laptop…

A : Just last week. My parents gifted me one…

B : Wow!! What configuration??

B : Does it have an HDMI port?

A man takes his seat at a FIFA World Cup Final.

He looks to his left & notices that there is a spare seat betwen himself and the next guy.

MAN: “Who would ever miss the FIFA world cup final?”

GUY: “That was my wife’s seat. We have been to the last five world cup finals together, but sadly she passed away.”

MAN: “Oh… that’s terrible, and very sweet of you to have her here symbolically by having a vacant seat. But these are expensive tickets; couldn’t you have brought another family member, friend or someone else with you?”

GUY: “No…they are all currently at her funeral!”