If you type 241543903 in Google Images Search you will get a lot of people with heads in their Freezers, do you know why?

When you type the number 241543903 in Image Search of Google you get a lot of people keeping their heads in Fridge and there is a reason for this.

David Horvitz a NY artist in 2009 has posted his picture on Flickr account with his head in the freezer and named/titled the image with “241543903”. 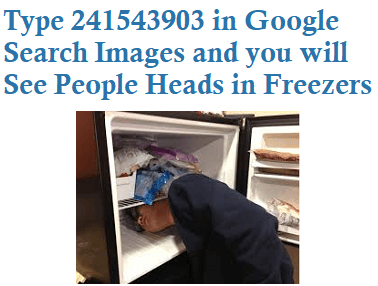 10 days later the same numeric sequence appeared on a Tumblr and posted an instruction for the readers like below.

Since then many people posted photos with head in freezer and title with 241543903.